By Lesley Patterson AKA Lady Opaque

“I dream of a day where I can walk down the street & hear people talk about morality, sustainability, & philosophy instead of the Kardashians.” – Keanu Reeves 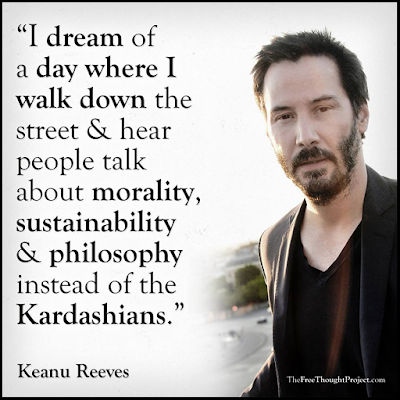 This infamous and yes, even a bit controversial quote from Keanu Reeves is just so bleak & depressing, yet it’s 100% truth. How is it that we’re more interested in celebrities than in nurturing our own minds? As our mind rots from the inside out as it does with all the television that most people watch, we are put into a submissive Alpha state where our brain waves literally will change from their normal, active BETA wave patterns, & will do a nose-dive into the inactive, passive Alpha ones, where we are rendered simply an observer & nothing more. We are being lied to & tricked by the media, by the government, & even sadder so, we’re deceiving ourselves. The masses would probably rather discuss the Kardashian’s, Bill Cosby, & debate on the latest Dr. Phil episode that they saw then to want to delve into anything deeper, such as philosophy or spirituality. Morals without a doubt & without question, have literally washed down the drain, & the very disparaging thing about it is that no one seems to really give a damn.

We are partly to blame for this slave-state which we’re often forced to drown in. We’ve got modern technology up to our eyeballs now, both literally & figuratively speaking, & we sure do utilize it. Think about it, how often are you MADE to interact with your phone or laptop because you HAVE to? Sadder still, how many are unaware of this unhealthy over-indulgence in these activities? We allowed this all to happen to us, yet despite these facts, hardly anyone is making better, smarter choice for themselves or even for mankind as a whole. We are unwilling prisoner’s & most of us do not even realize it just because they cannot visually see the bars of a jail cell. Well, I see them, Keanu apparently sees them, too, & we’re both tired of being in a philosophical prison, where anything even slightly intellectual or spiritual literally goes to die. I don’t ever watch the “idiot box” anymore. Anything that’s actually worthy of being done is ignored & is hushed into the background of living in a world that’s so filled with complete disregard & dull care, & with people who are addicted to being numb & not having to feel anything at all. Wake up, everyone! Turn off the TV! (Did you just check your phone again?)

Most importantly, (& I cannot emphasize this enough!) do not pass the bad habit of watching it too much television off to your children. Some of us don’t realize how bad it really is or they would never let their own kids watch it. We all know for a fact that the television should never be a babysitter. You should screen what you do allow your children to watch, & severely limit & cut back on TV time. Try encouraging healthier habits instead; read a book, have a good, deep conversation, do something nice for someone in need. Get out there and make a difference, stop sitting in front of that blackhole all day every day. Remember back in the 1990s when we used to have to do real things, not just virtual ones? (Yes, I am also saying your phone has you zombified.) Let’s do that again, because then & only then can we finally start to become aware of the invisible bars, & in my best of hope for the world, that is the time when we’ll finally be set free. It is when people come to the realization that their very humanity is being exchanged for high-tech devices, which in turn render us even less human. Don’t exchange your intellectual freedom for minor conveniences anymore. Become aware of how often you’re checking that phone or watching that TV. This is hopefully where the healing can start to begin.

If you liked this piece, please come & like my page below. Be sure to Follow me there for updated, new work. If you felt this post helped you at all, inspired you, or even just made you think a bit, then please leave a Review on my Page & say so. Word-of-Mouth is important, so please share my Page with your friends, too. I am honored that you gave me some of your time to express my inner voice. Thanks for sharing it with me.

Lesley Patterson
Lesley Patterson is an Award-Winning Author, Poet, Blogger, and Freelance Writer. She's a Shelter Pet - Rescue and Adoption Advocate and an Entrepreneur who is very skilled at Social Media Networking, Marketing, and Sales. Lesley is in her mid-30's and is a generational Scorpio Daughter, Sister, Wife, and Mother. She is a Spiritualist and a Natural Pagan Witch who offers Spiritual Advisory Services as well. Raised in the mid-1980s and early 1990s in Sacramento, California, she grew up in the Reno, Nevada area, and since then has moved out to Fallon, Nevada. She offers her various Services on a case-by-case basis, and she is very passionate about both what she believes in, and in what she writes about. She showcases her unique, original, and persuasive conversational-styled Writing here on WritingBeautifully.com and she runs both the website as well as her own Blog. You may get in touch with her at any time by emailing her at: LesleyPatterson@WritingBeautifully.com -- or by sending an email to the Admin at: Admin@WritingBeautifully.com #FreelanceWriter #WritingServices #Writing #Writer #WritingBeautifully #WritingBeautifullyBlog #Writers #WritersLife #WritersCommunity #ContentCreationSpecialist #ArticleWriting #NewsWriting #B2BWriting #B2CWriting #BusinessWriting #ContentCreation #ContentSpecialist #LadyOpaque #LesleyPatterson #GhostWriting #CopyWriting #Editor #Editorial #Journalist #Journalisim #Blogger #Blogging #ProfessionalWritingServices #ProfessionalWriting #ProfessionalWriter